Around 11:35 in the evening on weeknights, Jimmy Fallon hosts The Tonight Show on NBC for a national audience within the comforts of a studio at Rockefeller Plaza. Even as millions of Americans find themselves across from their televisions just minutes before midnight strikes, each episode kicks off the show with an eccentric opening filled with marvelous cuts of various destinations that doubly serve to highlight the guests appearing in the episode. in New York City. A jazz track performed by The Roots plays with the opening to compliment the pace and energy of the shot composition. Shortly after the song plays, the number corresponding with the current episode is shouted by Questlove just as co-writer Steve Higgins gives an enthusiastic introduction of Jimmy Fallon to kick off the evening. 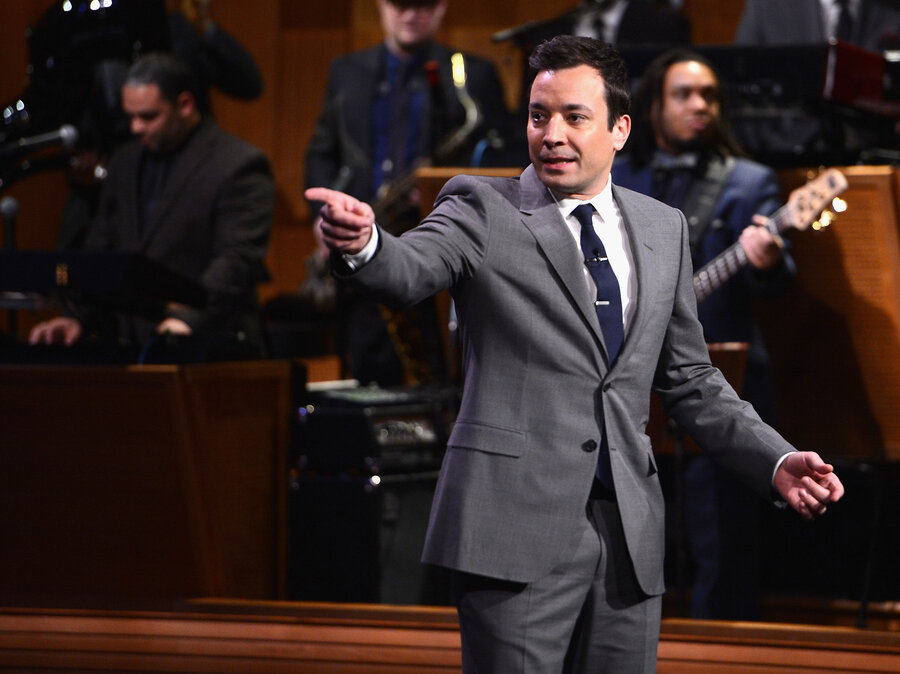 Every time that I have tuned into Jimmy Fallon to see what he has in store for the evening, I am ironically overcome by a pleasant feeling of relaxation in contrast to the vitality and tone present through the show. Personally, I find Jimmy Fallon’s show to be a safe haven, one that attempts to embrace positivity and comedy to provide an atmosphere nearly free of tension. And I don’t see these efforts as an attempt to distract our minds from the conflicts swirling our everyday lives; they feel like an avenue of relief that viewers across the nation can tune in to.

Therefore, it disheartens, and frankly alarms me when I witness instances of Jimmy Fallon unwillingly sucked into the heat of controversy as a result of the intense scrutiny applied towards specific statements and actions that are typically unwarranted.

For those curious about what I am specifically referencing, it dates back to an episode of The Tonight Show that aired in mid-September, in which then-presidential nominee Donald Trump made a guest appearance. At one point during their interview, Fallon jokingly asks for permission to mess up Trump’s hair, to which he proceeds to do so after Trump’s approval. Seemed like a light-hearted interview? Most people would agree with that sentiment, but it also seems that many would disapprove of its tone. Following the interview, Fallon received significant criticisms and accusations across social media for apparently “humanizing” Trump on the basis of his political agenda, with some viewing his beliefs as discriminatory.

However something that I find is often forgone is that through and through, Jimmy Fallon primary motivation is to entertain. So in scenarios like this, Fallon’s attitude towards Trump was quite characteristic of him, as he aimed to set the stage for a fun interview with the potential President of the United States at the time. In fact, Jimmy Fallon has firmly made it a point to express his personal disinterest in politics on the whole in an interview with TODAY:

“It’s just not what I do. I think it would be weird for me to start doing it now. I don’t really even care that much about politics. I’ve got to be honest. I love pop culture more than I love politics. I’m just not that brain.”

Not to mention, Fallon invited Hillary Clinton, the other presidential nominee during the 2016 elections, for an equally casual interview that lacked the hard-hitting questions one might expect in an interview with presidential nominees. And if we were to consider everything objectively, there are several aspects of Fallon’s interview with Clinton that could have warranted the same criticisms as the interview with Trump, but did not receive (i.e. not probing about the email controversy and “deplorables” comment) Not that I want to dwell on this particular matter, but I sincerely believe it instigates questioning about the daunting pressures of the social media sphere, in which a select few members attempt to enforce their own values and beliefs onto others to create a new reality that poses a battle of righteousness and indecency.

Now as a reminder, this event occurred about twenty-one months ago. Yet the reason the story is blowing up again stems from an episode of the Awards Chatter Podcast of The Hollywood Reporter. To generalize his comments, Fallon expressed regret over the course that the infamous interview took with Trump, lamenting that the resulting backlash impacted his reputation and prompted him to reflect on the status of his show.

However, a certain individual happened to catch wind of his comments on the podcast…

Having been called out by the President of the United States, I feel that Fallon finds himself psychologically trapped on all cylinders. On one hand, he’s garnered the criticism of many individuals for the handling of his interview with Trump for not taking a more serious approach. However, it’s likely that Fallon will have a new sleuth of detractors prepared to come after him in light of this new tweet by Trump. Of course, your opinion on the necessity and efficiency of the President’s comments is something that I will leave up to the individual, as one’s interpretation is entirely subjective.

That said, the concern that I continue to hold remains clear in my mind: the social sphere of society is gradually morphing into a state that seemingly requires it participants to take a definitive side and move against each other. In addition, it appears to emphasize the need to be politically active on all fronts by any means necessary. It’s largely why other late-night shows hosted by the likes of Stephen Colbert and Jimmy Kimmel that have doubled down efforts to incorporate political commentary into the framework of their programs, and in the case of the former overtaken Fallon as the one of the most-viewed late night shows on television.

And not only is Fallon not benefitting by sticking to his guns, but he’s receiving attacks from everywhere on the political spectrum, unable to please someone at any given time.

Well if there’s anything we can learn from this, Jimmy Fallon won’t have a thank you notes to write to Trump : )